The traditional owners of the land are the Letteremairrener or Port Dalrymple clan who migrated up and down the shores of the Tamar River from Low Head on the North Coast of Tasmania, south to the Cataract Gorge and current site of the Penny Royal in Launceston.

Penny Royal started back in 1972 when local developer Roger Smith found a pile of convict bricks on a property at Barton, in Tasmania’s midlands.  Delving into history it became apparent that the bricks were once buildings owned by Andrew Gatenby and his family, early pioneers of Van Dieman’s Land.  They arrived in 1823 and settled on land between Cressy and Ross on the Isis River, then known as Penny Royal Creek. They built their farmhouse and mill house there and made a life on the land. However over the subsequent years the mill fell into disrepair. When Roger found the bricks, he purchased them off the current landowner with the plan of rebuilding the mill and creating a tourist attraction . The site was chosen near the mouth of Launceston’s most visited attraction; the Cataract Gorge. The complex task of disassembling and relocating the old bricks to an old quarry in the centre of Launceston was carried out.

The attraction opened in December 1979 and featured interesting products such as a short boat ride, cannons being fired, an interpretive barge ride on how to create gunpowder and radio controlled boats. At its peak, in 1980-81, the site received a record 4666 visitors in one day.  However, during the 1990’s and early 2000’s a combination of visitors expectations heightening and inconsistent management, the site lost its appeal and was shut for more than eight years.

In 2014 JAC Group headed up by Josef Chromy OAM purchased the site and announced plans for an ambitious new development of the site, which received much support from the local community.  Josef has played a key role in Tasmanian wine and tourism in the North of the State.  His life is a celebrated Tasmanian rags to riches success story and is part of what sets the JAC Group’s developments apart.  After fleeing Czechoslovakia during World War II with only the clothes on his back, Josef chose to create a new life on the other side of the world in Tasmania.   Josef developed the smallgoods company Blue Ribbon, a leading Tasmanian brand, and used the proceeds of its 1993 float on the share market to invest in tourism in Tasmania.

After two years in development the run-down Penny Royal location was transformed to a modern welcoming tourist complex officially opened in April 2016. 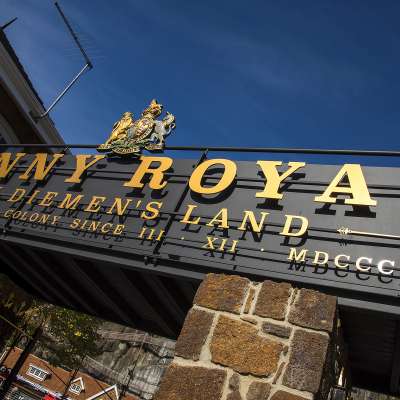